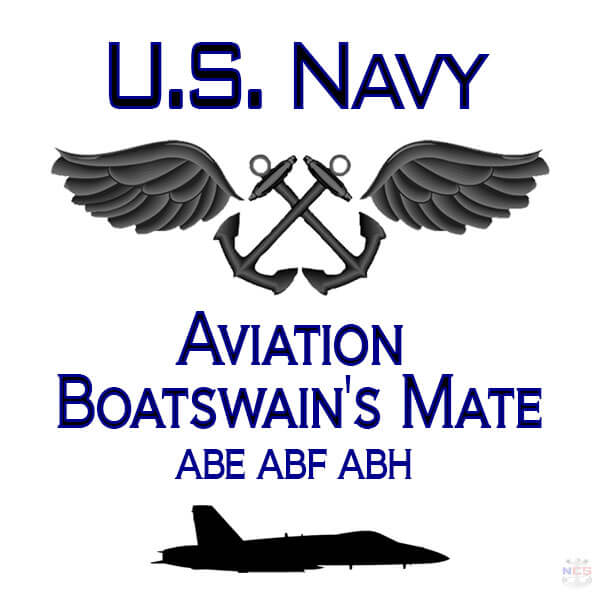 Aviation Boatswain's Mate was established as a rating in 1944.

The Navy's computerized personnel system associates the rating name with an alphanumeric Navy Occupational Specialty (NOS) code. For AB, the NOS is A100; ABE, A101; ABF, A102; ABH, A103.

Aviation Boatswain's Mates play a major part in launching and recovering naval aircraft quickly and safely from land or ships. This includes preparing and fueling planes prior to take-off and after landing.

AB's may specialize in launching and recovering aircraft on the flight deck of an aircraft carrier, ABE; aircraft fueling and fuel systems, ABF; or aircraft handling, fire fighting and salvage and rescue operations, ABH.

Later in their careers, ABs can earn the advanced AB rating that requires supervision of all these individual specialties.

ABE "A" school is five weeks and ABF & ABH "A" schools are six weeks in duration. All three schools are located in Pensacola, Florida. The AB rating requires a 60 month (5 year) service obligation.

Aviation Boatswain's Mates (Fuels) operate, maintain, and perform organizational maintenance on aviation fueling and lubricating oil systems in CVNs, LHAs, LHDs, and LPDs, including aviation fuel and lubricating oil service stations and pump rooms, piping, valves, pumps, tanks, and portable equipment related to the fuel system. They operate, maintain, and repair valves and piping of purging and protective systems within the Air Department's spaces aboard ship, and they supervise the operation and servicing of fuel farms and equipment associated with the fueling and defueling of aircraft ashore and afloat.

Sea tours and shore tours for Sailors that have completed four sea tours will be 36 months at sea followed by 36 ashore until retirement.

Sailors in the Aviation Boatswain's Mate rating can expect to spend more than half their career on sea duty assignment. Sea tour lengths for the AB rating will not involuntarily exceed 60 months for Sailors with less than 20 years of service (YOS) and 48 months for Sailors with more than 20 YOS. Shore tour lengths between sea tours will be set to 36 months long. Manning conditions at sea may require the need to request sea tour extension or shore tour curtailments to ensure all sea duty billets are filled.

To qualify for placement in the AB rating, individuals should relate well with other people, be physically fit and have manual dexterity. They should have a keen awareness of the need for required details to safely complete a job, the ability to do repetitive tasks and be good team workers.

Other helpful traits include curiosity and competence with tools, equipment and machines.

Vision must correct to 20/20, you must have full field of vision, and must have normal depth perception and color perception (required for all three ratings). Members of this rate are not required to be citizens of the United States.

Most of the work in this rating is performed outdoors on the deck of aircraft carriers, in all climatic conditions, in fast-paced and often potentially hazardous environments. ABs work closely with others in aviation ratings. AB ASVAB Test requirement.

Opportunities in this rating are good. At present, there is a combined total of about 9,570 men and women that work in the three Aviation Boatswain's Mate specialties.

Personnel in the Aviation Boatswain's Mate rating are paid allowances (BAH, BAS, etc. if eligible) and enlisted military basic pay based on years of service and paygrade.

Throughout your career, you may have an opportunity to attend advanced technical training ("C" schools) which may be eligible for additional college credits.

Navy jobs and programs are revised at times, the information contained on this page is subject to change.