How Military Time is Measured 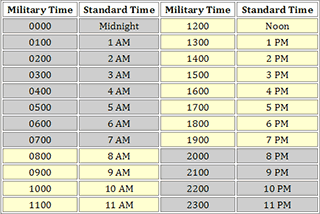 The fundamental means of measuring time is the rotation of the earth. The original standard by which all clocks are regulated is furnished from observation of the stars and their relationship to the earth.

Whether telling the time via the direct observation of the stars or some other means, precision is paramount to the military. For the precision required in navigation and the syncing of mission resources of today's armed forces, everyone must be on the same page.

Enter, the atomic clock and the use of "Greenwich Mean Time."

For today's military, time pieces are calibrated using an atomic clock. The Department of Defense's main atomic clock that is used for calibration and to standardize time for the military was developed at the National Institute of Standards and Technology laboratories in Boulder, Colorado.

Every meridian has its own mean solar time. In order to avoid continual changing of time as one travels east or west standard time zones are introduced. Each time zone is 15 degrees of longitude in width. The difference between adjoining zones is one hour.

Nautical time zones are used by the military to ensure a standardization of time for the forces. Standard military orders would be delivered in Zulu time. Zulu time is the same as "Greenwich Mean Time" or GMT. Depending on the ship or units location on the planet, it will determine the amount of offset required. For example, if the orders were to launch a mission at 1000 Zulu, and your ship was located near Tokyo, Japan in the "India" time zone -- the India time zone is GMT plus nine hours, so you would subtract nine hours from 1000 Zulu, and know your time to launch would be 0100 local time (India).

Note 1: Although located in the Delta Time Zone, local time in Afghanistan is GMT +4 hours 30 minutes.

Note 2: Although not normally utilized in military communication due to the confusion it can cause, the time zone J (Juliet) has be used to indicate the observer's local time in other forums.

The United States military uses a 24 hour clock to save confusion. There are not two "four o'clocks" in military time as there is with civilian time. The civilian 4:00AM is equal to 0400 (Zero four hundred) and 4:00PM is equal to 1600 (Sixteen hundred) military time.