Today, Commander, Navy Recruiting Command (CNRC) has announced the formation of an Esports team to help with the recruiting effort (see NAVADMIN NAVADMIN 048/20 below). This, of course, is not the first time CNRC has looked to gaming, specifically online gaming, as a method of contacting its target market. As a matter of fact, Navy Cyberspace, this very Website, was created by myself while working on the CNRC staff, and its original purpose was to contact and converse with potential applicants. The game used at the time, February thru May of 2004, was the popular Counter-Strike. 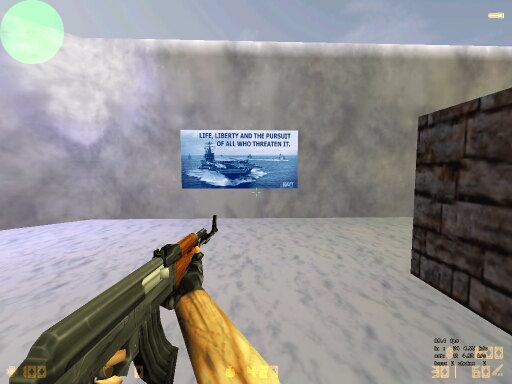 After contacting Valve Software, I learned how to add sprites to the various locally hosted maps. The sprites were of well known recruiting posters of the time. While playing the game, potential applicants would see the posters and an occasional text scroll at the bottom of their screen that told them to visit navycs.com for their in-game play statistics. Of course, while on the site, they would also be introduced to various facts and opportunities of service in the Navy.

Navycs.com has lost the gaming image it had these 16 years ago, but it has been one heck of a hobby for me ever since, but I digress.

Ultimately, the concept was approved, but not using the game Counter-Strike. The choice was made to create a standalone game — one that was much less violent… The game CNRC and Campbell Ewald, the advertising agency used by CNRC at the time, contracted was called Strike and Retrieve.

Here is a video of Strike and Retrieve (make sure you are not drinking any fluids as I am concerned for the welfare of your screen):

For details how you may one day be a member of the Navy’s new Esports Team, read the following NAVADMIN! LEEROY JENKINS!!!

RMKS/1. This NAVADMIN announces the launch of the Navy Esports Team by Commander, Navy Recruiting Command (CNRC). The Navy Esports Team will add to the multi-faceted outreach campaign of CNRC by engaging with prospective Sailors online and at gaming venues. Centennials are moving into digital spaces for most of their content consumption and social interactions, and the Esports domain is one of the most popular and vibrant online arenas to date. Connecting with future Sailors requires the Navy to be in the same spaces where those future Sailors reside.

3. Potential team member selectees will be screened for team fit and recruiting duty. Upon approval, they will receive a set of 3 year orders to CNRC, Millington, TN. Selected team members will receive recruiting training at Navy Recruiter Orientation Unit (NORU), Pensacola, FL en route to CNRC. The intent of NORU training will be to further develop communication skills and to ensure team members understand the types of information sought by those inquiring about service in the Navy.

4. The team members will operate at a facility specifically designed for the team to practice, stream and compete. Once the team members have checked into CNRC, they will develop a routine streaming cadence, encouraging followers and viewers to interact with the members and recruiting content.

5. Team member applications will be accepted via a portal that will be open for periods identified on the site. The next submission window is 15 March 2020 through 1 May 2020.

6. Additional Information
a. Detailed requirements for this program are listed on the CNRC webpage and should be reviewed thoroughly by individuals prior to submission. The webpage provides topic specific information such as: