The Navy's Slogans: The Words Set the Tone 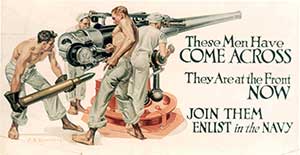 For just about the entire time the United States Navy has been in existence, we have had slogans that were used to help recruit Sailors, but it wasn’t until 1973 that the need for a focused recruiting campaign became a true necessity. It was in 1973 that the draft had ended. It was the first year in modern times that our military had to recruit an “all volunteer force.” Each service could no longer count on conscription as a means to fill the ranks. True, the Navy really never counted on the draft, but it benefited greatly from the amount of people who sought out a Navy Recruiter before their draft number was announced, a good chunk in an effort to avoid service in the Army. Amazingly, every once and a while when I was serving as a Recruiter in the mid-80’s, someone would walk into the recruiting station and announce that they wanted to join the Navy “before they got drafted.”

In 1973, competition between the services for finding the best qualified applicant was on. It was time for the Navy to hire a full time advertising agency. The advertising company would have to research the target market and develop a plan to “sell” the Navy. It wasn’t going to be easy. The nation was just coming off an unpopular war, military pay was nothing to brag about, and it was a lifestyle that you could not “test drive” before you bought it.

Grey Advertising has the distinction of being the first. Grey Advertising was, and continues to be, a very well respected company who currently has clients like Coca-Cola and even the NFL, but only worked for the Navy for two years, from 1973 to 1975. They developed the “Be Someone Special” campaign that ran the duration of their contract.

What was the longest running, and arguably the most popular, slogan ever? “Navy. It’s Not Just A Job, It’s An Adventure”. It was developed by Bates Advertising in 1976. The slogan officially ran until 1986, but I must admit, I hardly remember Bates Advertising’s final contribution, “Live The Adventure” that ran from 1986 until 1988, and heck, I was even serving as a Recruiter during that time! Maybe that is why 1988 was the last year Bates Advertising worked with Navy Recruiting, or maybe it was just time for some fresh ideas…

Fresh ideas came at a relatively torrid pace once the next company entered the fray. “You Are Tomorrow; You Are The Navy” which ran from 1988 to 1990 was the first of three slogans created by BBDO Worldwide. They are famous for the “Have it your way” jingle for Burger King and two other fairly popular and effective campaigns used by the Navy, “You and the Navy Full Speed Ahead” that ran from 1990 to 1996, and “Let The Journey Begin” that lasted from 1996 until the start of the new millennium.

BBDO, so far, has the longest tenure of all the ad companies the Navy has used since the onset of the all volunteer force, but with their new contract, Campbell-Ewald should easily eclipse their record if they can complete the five year contract they won in May 2009.

Campbell-Ewald, best known for the creation of the popular “Like a Rock” campaign used by Chevrolet, hit the ground running with the slogan, “Navy, Accelerate Your Life” which ran from 2001 through 2009. 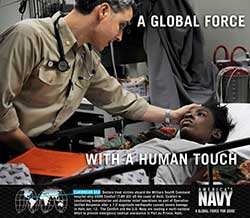 Until now, each recruiting campaign used by the Navy has been used to entice the target audience to seek more information regarding enlistment or commission – after all, they were developed for, and used by recruiting command, but for the first time, the latest slogan, “America’s Navy – A global force for good,” was actually created with the motivation of the entire service in mind. The mission of the Navy will always be to protect and defend our country against our enemies, and to ensure the United States and our allies can move freely on the world’s oceans, but now the Navy’s mission has been extended to include an even more humanitarian role.

Though partner nations, non-governmental organizations and other U.S. government and international agencies, the Navy has been executing a variety of humanitarian and civic assistance missions such as 2004 tsunami relief and the earthquake in Haiti. Most recently, the hospital ship, USNS Mercy, has embarked on “Pacific Partnership 2010” to assist those less fortunate in Vietnam, Cambodia, Indonesia, Timor-Leste, Palau and Papua New Guinea.

Previously, the various slogans used by the Navy have set the tone for how Navy Recruiting Command will move forward in attaining the mission of finding and contracting enough quality personnel to ensure we maintain the manning requirements dictated by the President. Now, with the current campaign leading the way, because slogans will have to be multi-functional and all encompassing, I suggest in the future that the Navy’s major claimants participate in the creation, or at the very least provide feedback prior to a campaign’s approval.

The eighth official slogan for the Navy since the beginning of the All-Volunteer Force, “America’s Navy — A Global Force for Good”, officially ran from 2009 to 2014. Campbell-Ewald maintains its position as the Navy’s advertising agency, and according to the Navy Times article, they are currently running focus groups to develop the next slogan.

The ninth slogan, the generic, “America’s Navy”, ran as a simple brand from December 2014 until December 2017.

The tenth official Navy slogan was announced on December 5, 2017 — “America’s Navy, Forged by the Sea”. The Navy’s current advertising agency, Young & Rubicam, ended the slogan drought that began when the Navy abandoned “A Global Force for Good” back in December 2014. The new slogan is just in time to meet increased recruiting goals and a better economy.

Before asking a question, use the site search!