These Feet Don’t Back Up 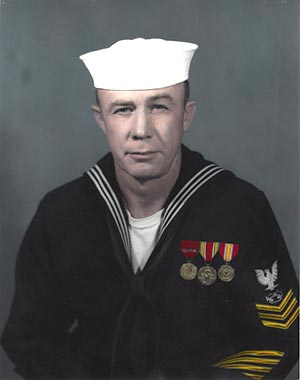 The sun comes up pretty early down in Southern Louisiana, but not before the hardworking souls that toil away over the lands to produce the nourishment required to live. You get used to the heat, the humidity, and even the insects, but you never get used to pains of hunger, especially when it is pain felt by those of your own family.

Fred Gill Jr. was born on October 19, 1923, just outside of Kentwood, Louisiana. Even before the Great Depression, life in the rural South was tough. Fred recalls, “If you didn’t have a farm and work, you didn’t eat.” As a kid growing up, there wasn’t much time to contemplate the problems outside his own. His entire world was his family and friends of that small country town.

Patriotism in rural America has always been strong. When the radio announced the attack on Pearl Harbor, Fred, just like every other red-blooded American was ready to answer the call, but leaving at that time would have put unbearable strain on the family. His father needed his help to feed his younger siblings. His mother was very ill. Fred’s war was much closer to home.

The urge to serve our country was strong. After his mother’s passing, and life started to stabilize at home, he was ready.

In late 1942, Fred made his way about 90 miles south to New Orleans where he ended up at the door END_OF_DOCUMENT_TOKEN_TO_BE_REPLACED

Recently, I had the opportunity to discuss an important health initiative with Marine Corps Master Gunnery Sgt. William Mahoney, Senior Enlisted Advisor to the Under Secretary of Defense for Personnel & Readiness and the Assistant Secretary of Defense for Health Affairs, and Navy Command Master Chief Terry Prince, Senior Enlisted Advisor for the Defense Health Agency, going on within the Department of Defense (DoD). The initiative, “Operation Live Well”, now celebrating its one year anniversary, helps focus members of DoD on healthy living and beating tobacco use.

The topic is of major importance to those of you seeking enlistment. Many of you do not currently have a routine of fitness, some of you are battling weight issues, and a few of you use tobacco products which impedes your progress toward success. Remember, while at boot-camp, END_OF_DOCUMENT_TOKEN_TO_BE_REPLACED

Hurry Up and Wait

Lately, well, actually, over the past few months, I have been getting a growing number of applicants, and even some recruiters, telling me via comments in the blog, social media, or via email that they are waiting on their local commands and MEPS to inform them to whether their police involvement and/or medical condition will allow them to move forward with their processing. This is actually a normal part of the processing.

When an applicant has a “yes” answer on their medical prescreening form, DD Form 2807-2, Medical Prescreen of Medical History Report, the corresponding medical records must be submitted to the MEPS for review. MEPS personnel will respond with one of a few options, either, eligible to process, permanently disqualified, temporarily disqualified (usually a timeframe will be given as to how long the disqualification will be in place), or that more medical documentation is required (link updated to reflect the new MEPS timeframes).

What isn’t normal is having to END_OF_DOCUMENT_TOKEN_TO_BE_REPLACED

Although I didn’t see it this way while I was in, one of the beautiful things about being in the Navy is the regular physical exertion required to stay in shape and the periodic weigh-ins you had to pass in order to stay in. Once I retired, I ceased doing any regular exercise, and I certainly stopped trying to maintain in-service weight standards. The result? Not good.

Six years into retirement and I tipped the scale at more than 40 pounds that of which I left with. I really didn’t notice the weight gain; I mean, you look in the mirror everyday — the change is so gradual that you just don’t see it. Sure, the scale keeps telling you, but what does it know, I still look as good today as I did yesterday! END_OF_DOCUMENT_TOKEN_TO_BE_REPLACED 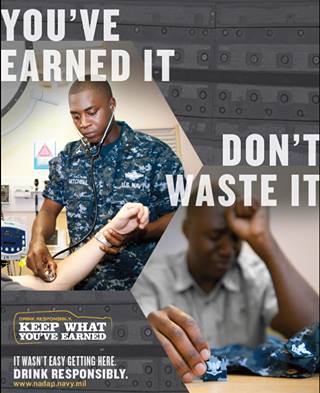 It has been over a decade since I was on the phone with one of my Chief Petty Officers who worked a couple of hundred miles from our headquarters; most of the specifics during the conversation has long since left my memory bank, but the overall content of the call, and what occurred afterwards, will be with me forever.

It was a Friday afternoon, and information was passed to me that a relatively new check-in to our command was believed to be either wearing really bad cologne or he may have had alcohol on his breath when the person saw him that morning.

During the call, I do remember the Chief admitting that he had a couple of drinks the night before, but he didn’t feel there was any way he was inebriated by the time he got to work that morning. We continued our conversation and I asked him if he would voluntarily meet with the command’s Drug and Alcohol Program Advisor (DAPA) on Monday. He agreed; I actually remember him sounding like he was looking forward to it. I hung up the phone with him saying the same thing I said to every Sailor, “Drive Safe”.

I don’t recall what time of the day it was, but I received a phone call at home that Sunday. The Chief END_OF_DOCUMENT_TOKEN_TO_BE_REPLACED

Every once and a while, I will publish a guest post from Sailors or Future Sailors who like to write and have their works put out for all to see.

Today, I would like to introduce ETSA Slebodnik with his first essay, “Anger: Us and Them.”

“Anger: Us and Them”
by
ETSA Slebodnik, D.V. USN

Everyday it creeps into our minds like a parasite. It finds a way in, finds a corner and slowly spreads. Taking away from our family, our job, and our own joy. Replacing all the goods things in life with hate, resentment, pain, and regret. This parasite that lives off of our own misery is “Anger.”

Pick your poison on how you get it. Some punk in your class, losing the promotion you bust your guts for, your own cowardice. Makes no difference how it gets in you, the END_OF_DOCUMENT_TOKEN_TO_BE_REPLACED The knife shakes in his hand. He moves the small three inch blade slowly down his arm. He’s rehearsing this. The cold steel of the blade slowly scrapes back up his arm as his tears fall onto his pale forearm.

With his mind running wild and his eyes filled with tears and hate, he grits his teeth. He knows that it is coming soon. He’s planned this all day, almost looking forward to it in class. It is supposed to take all of the pain, the suffering, the frustration and hate.

Thoughts of his mother ring through his head. He remembers being a small child with his mom. He remembers holding her hand in the parking lot, and the love that he felt with that. He would look at her and smile. Love fills his heart.

Insanity instantly comes and rips out the love. He remembers her, his now ex-girlfriend. He remembers the pain that he’s caused her, and how she has now turned his entire family against him. My family no longer even wants me on this planet, he thinks to himself.

He removes the cell phone from his pocket and END_OF_DOCUMENT_TOKEN_TO_BE_REPLACED

Until I am too old to post them, the United States Navy Master Chief, Senior Chief, and Chief Petty Officer results (actual selection, not the board eligible list) will be posted here, each year when they become available.

Results will be delivered to the Member’s command triad (CO, XO, and CMC) via BUPERS Online the day before the NAVADMIN will be released.

Congratulations to all the Navy Chief Petty Officer selects!

END_OF_DOCUMENT_TOKEN_TO_BE_REPLACED

>>>>>The FY-11 list; Congrats!<<<<<< Congratulations to all the FY 2010 selectees! And I would like to send a special BZ out to all the Navy Counselor Chief Petty Officer - Career Recruiting Force (CRF)! For the rest of the 2010 list here is a copy of the NAVADMIN END_OF_DOCUMENT_TOKEN_TO_BE_REPLACED

From a recent NAVADMIN describing our Navy’s Ethos. An ethos identifies distinguishing character, culture, or beliefs of a group or institution. Navy Ethos is designed to communicate a set of beliefs appropriate and important to the more than 400,000 military and 180,000 civilian personnel who share a common bond of service in the Navy, regardless of background, personal experience, or position.