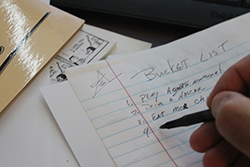 A popular movie of 2007, The Bucket List, starring Jack Nicholson, Morgan Freeman, and Sean Hayes, had two terminally ill men escape from a cancer ward and try to complete a list of things they always wanted to do before they “kicked the bucket.”

Lately, I have been hearing the term thrown around more and more. Mostly by my parents, who are still pretty young and energetic. One example is just this last Christmas, my father booked a North Atlantic cruise and they will see such countries as Estonia, Russia and more. The card he used to surprise her had written, “Mark this off the bucket list!” Incidentally, they are on the cruise right now – we haven’t heard anything yet, but I assume they are having the time of their lives.

Just the other day, I received an email from Geoff Breedwell, a future Sailor, who wrote an excellent piece about how to lose weight and get in shape for boot camp that describes the things he wants to accomplish before he goes off to boot camp in late August – he referred to it as his “bucket list.” With his permission, here is the email;

This is the last time I will live in Nashville within the foreseeable future.

With a little over 90 days left to spend in within the Nashville area, those thoughts have been on the forefront of my mind.

My sister recently came to town to help with the flood relief, and I got to finally have a beer with her and my family. I loved the time that we all spent with her, and the advice she gave me has inspired me.

She brought up the idea of a bucket list. Most likely taken from the movie of the same name starring Morgan Freeman and Jack Nicholson, a bucket list is a list of the things that you would like to do before you die, change locations, change clothes, change underwear, etc.

Here is my bucket list of things to do before I leave for RTC. A lot of these things are things that I can do at the same time; example, “going to a pool that isn’t in my apartment complex,” and “jumping off the high dive.”

Other things, I will need some help completing. That is why I have implored you, my friends and family, to help me with this list. Bobbie is taking care of the items that concern her; however, it is with you, that I will need the assistance. It does not have to be immediate, as in I don’t leave until the end of the summer (Aug 25th).

The more people help, the more fun everything will be for everyone. Well, except for the date nights with my wife. Those are just for the two of us. Unless”¦no, she’ll kill me.

Let’s get to it!! Currently, the countdown is at 80 days and counting. I have 10 weeks left at Cracker Barrel, and even less than that at Taco Bell. This summer is going to be the best ever, and I would like to spend it with each one of you.

A fairly ambitious list, and everything looks to be legal (I’m assuming he is 21) – have fun!

The Navy, in 2011, is projected to ship about 40,000 people on to active duty – a pretty good chunk of those future Sailors have already been identified and are currently members of the Delayed Entry Program awaiting their day. Because the Navy has such a strong DEP posture, you can expect to wait for your ship date, maybe up to a year, and making a “DEP time bucket list” like Geoff has, isn’t a bad idea.